College basketball players (and football and any other revenue generating college sport, male or female) should be getting paid and or allowed to earn revenue.  That is not the NBA’s problem.  But just because it is not its problem, it doesn’t mean it can’t be part of the solution.  And it doesn’t mean the NBA can’t benefit from that solution.

One and done stinks.

It is not good for the college game – We’re now rooting for laundry and rivalries on muscle memory.   However they’re nothing like they use to be with the constant turnover of marquee players.

It’s not good for the NBA game – Players aren’t developed like they use to be, nor come into the game with the following they use to.

It is not good for the college players who aren’t getting paid for their skill – While comparisons to slavery are off-base, in high revenue generating sports, players not getting paid or being allowed to earn money is a gross form of exploitation.

One solution I’ve heard Jason Whitlock from FOX Sports talk about on his podcast is to somehow turn college basketball into the NBA’s minor league system and figuring out a way for NBA teams to help pay the players.  Whitlock goes on to talk about how the college game is hurting and improving it would be good for the NBA.  I agree.
Michael Jordan was so infatuated with North Carolina, he wore their practice shorts under his Chicago Bulls shorts his entire career.  Despite making far less money in their pro-careers, legends of the past, Jordan, Magic Johnson, Larry Bird, Isaiah Thomas, (the first), Patrick Ewing, John Stockton, etc., stayed in college longer and are more devoted to the institutions that didn’t pay them then the pro teams that did.  (Side note, don’t tell me there is no value from learning from Dean Smith, Mike Krzyzewski, John Thompson, John Wooden, etc., etc., and staying in school for more than a year.

Today’s NBA player, doesn’t have the loyalty of players past.  Today’s NBA player takes the path of least resistance and doesn’t want to overcome obstacles.  They want super teams.  Players use to team hop/ring chase at the end of their careers, most now look for the quick exit.  This isn’t “wrong”.  It is the player’s right, but is it good for the game?  Is this decreased loyalty and path of least resistance good for owners and fans? 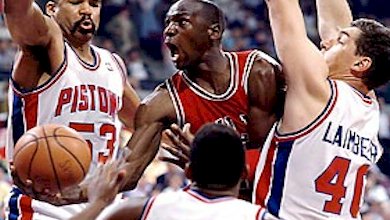 Considering the owners keep trying to change the salary cap and rules to create incentives for less player movement, I’m thinking the owners don’t like it.  Fans look at how past players, like Jordan, had to overcome the Detroit Pistons, who had to overcome the Boston Celtics AND  Los Angeles Lakers and how the game’s best competed against, and not with each other, as diminishing the accomplishments of today’s players looking for the easiest path.  And the saying, “well 20 years from now no one will remember”, is no longer true.  The explosion of the media/social media will assure distinctions that may have been lost in 1900’s will in fact be remembered.

So what’s the fix?

For example, let’s say the Lakers drafted Lonzo Ball out of high school and after UCLA lost in the tournament they called him up.  The following season, the Lakers could have a choice at the start of the year.  One- have him play his sophomore year at UCLA or be with the Lakers from the start.

Under this formula, the players, the NCAA and NBA all have something to gain.  Players are getting paid right away.

Many would likely stay in school longer which should improve their development and perhaps would inspire loyalty and teach them about overcoming obstacles.  By sticking around maybe they win that NCAA title that they lost their freshman year, and make great relationships that they wouldn’t have.

Brief stints with the pro-team can show them what they need to work on and give them feel for NBA life so that by the next time they’re called up they’re more ready for it.
The player, NCAA and NBA would gain from the buzz of the elite players going back and forth from the college to the pro game once the player’s college season is over.
Player or team options to waive or re-enter the draft if the pro team doesn’t commit to the player at the start of an NBA season after year two, three or four can be worked out, but the above framework allows players to be paid right away and improves the college and pro-game.

Oh and did I mention, the media would have an absolute field day debating the decisions made by coaches as to when to take players, bring them up, send them down, etc..

There is some risk for the player in that if he doesn’t develop as projected his stock could lower (or rise), and he could be waived or lose his NBA rookie contract.  For the elite high school athlete this risk could be offset by endorsements and other earning opportunities.

There are kinks to be worked out but one thing is for sure, it is past time for college athletes (NCAA division I basketball and football specifically) to be getting paid something.